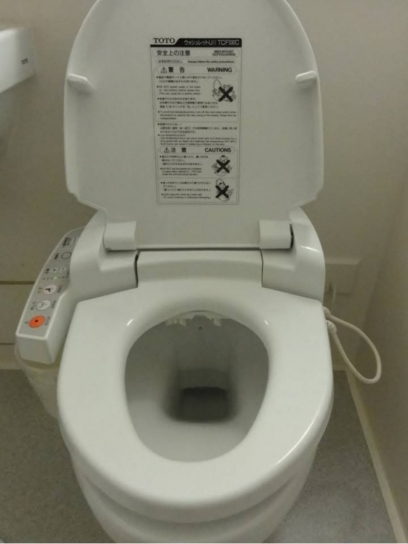 As a European, I have never quite been able to understand the Japanese obsession with the fancy toilet gizmos that seem to be universal now in Japan and I'm always suspicious where water and electricity work in tandem, but as this is my only choice in the hotel room, I am forced to use it and try and understand it.  So I have decided to lift the seat (sorry about the pun) and find out what’s the story behind (sorry again) this phenomenon? ﻿

Most of the fancy toilets are made by TOTO of Japan who have around 65% market share – not bad for any market, and is the world’s largest manufacturer of toilets.  2nd is Inax, at 25% with Panasonic and NIAS being other players.  TOTO has been manufacturing ceramic sanitary wares for the home since 1912, such as basins for kitchens and bathrooms, and first introduced what is known in the trade as a ‘washlet’ in the 1980s.  It was slow to catch on at first, but growth has been steady and today Toto ship 30 million washlets a year1.  Now there are more Japanese homes with washlets than have personal computers.  Prices start at around $500 but top of the range versions can cost over $5000.

Up to now, Toto’s main market has been Japan, but I for one have noticed Toto products in hotels around the world, and particularly in China where Toto is the brand of choice and Toto’s leading export market (around $500million per year).  For an industry that’s frankly not very sexy, Toto have done very well, growing consistently every year with sales n 2011 of around $5,7bn, producing around 234million USD operating profit (source:  Toto Consolidated Financial Statement Fiscal Year Ended March 2012).  Whilst the business in the US and Europe is still very low despite their efforts otherwise, Asia is providing many opportunities for them, and since 2010 they have brought on line new fabrication plants in Vietnam, India, China and Thailand.

Whilst toilet humour (sorry, I will stop) might lead those of us not brought up with one in the house to somewhat mock the product, it’s becoming apparent that there are more evolutions and real benefits from this type of toilet beyond its obvious functions:  researchers have for example added medical sensors to washlets which can measure the blood sugar based of the urine, as well as measure pulse, blood pressure, and body fat of the user and then send the data automatically to one’s doctor via built-in internet-capable communications, together with other uses such as help for the elderly unable to wash themselves, etc.

Toto is ambitious.  Whilst their stated mission clearly needs a better English copy writer (“Mission:  We will realize “Providing the World a New Every Day”), their sales plans are serious with an objective to reach nearly $8bn of sales over the next 3 years, and a push to be at the front of the green/ecological agenda by producing the most water-saving devices.   With rising demand, extensive capital investment in R&D and new plant, and a dominant market position they are a classic example of how a niche company can succeed and make profit in a dull and low-tech industry which is not so obviously big or rich enough to attract lots of competition.  Add a lot of hard work, some luck, but primarily sheer persistence at sticking at an idea until it catches on.  They didn't just corner this market, they created it.  If and when others do spot the opportunity, it’s too niche, too specialist and not sexy enough to enter, and besides, Toto probably doesn’t threaten anyone directly, so they can look forward to many years of profitable business and market share.