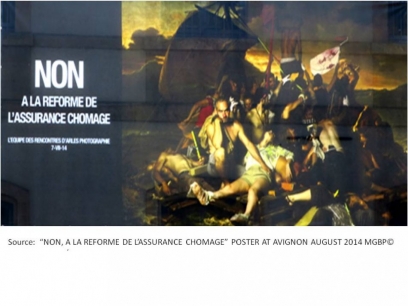 (But has just ended after 14 days)

I just wanted to say a personal note of thanks to all the Air France pilots who potentially left me stranded without a flight back from China.  Silly me, I had forgotten to check the National Strike Calendar before I booked the flight with you.  But thinking about it, it wouldn’t have been much good, because apparently you are threatening your employer not just with a number of strikes at certain key times in the year, but to go on strike “indefinitely”!  French intransigence knows no bounds.

Ridiculously high costs (not totally unlinked to the pilots’ pay and benefits) has driven Air France (AF) into a corner, attacked by the high end luxury carriers on long-haul, and Ryanair and Easy Jet et al on the short haul – this made AF management take the wholly unreasonable step of saying that they would have to respond to the low cost (LC) carriers with like for like, launching their own new LC sub-brand – Transavia- for which they would recruit pilots on completely new and non-AF contracts.  The thought of that new business actually responding to customer needs and doing well has driven myopic AF pilots into Luddite, crude and blunt responses, going on strike and blaming AF management.  The pilots’ unions SNPL and the smaller SPAF have been claiming that "Air France management has total responsibility for the conflict with its pilots".

I remember being a BA flight to India a couple of years ago when I was served by the coffee and food by pilots, some in their captains’ uniform, and some in jeans, as they stood in for the cabin crew who had gone on strike, and the pilots had clearly decided not to support the cabin crew’s strike and to keep the planes running even if they had to do it themselves.  One of the pilots told me why:  “Actually our union is quite rich, and when Willy Walsh announced his new strategy (that we were being squeezed by the high quality carriers from above and the LCs from below) and that the only answer was to a) go upmarket and b) reduce costs, particularly wages, we hired McKinsey to our own strategic analysis and strategy.  And when McKinsey came back and said to do exactly what Willy was saying, we knew and accepted that he was doing the right thing, and that’s why we don’t support this stupid strike by the cabin staff”.  Now isn’t that an intelligent and pragmatic response to a difficult business issue?  Compare and contrast with the AF pilots in not more than 500 words…..

Unfortunately, the reasons why AF pilots are behaving in such an unreasonable way is because , sadly, that’s how much of France behaves and the public and the politicians allow them to get away with it.  “Non” is widespread and systemic (see the poster here for “No the reform of unemployment benefit”).  Resistance to change is endemic and paranoiac, as France slips further and further down the economic scale, desperately hanging onto a status quo that the global economy is fast making irrelevant.  In the meantime, the pilots’ actions at AF have meant a €300m loss to the company, thus deepening the ongoing financial losses at their employers, in a wilful act of selfish protection and destruction.  AF revenues were €25,5bn in 2013 [no growth from 2012] but produced an eye-watering €1,7bn nett loss.  First half 2014 results were a €610million nett loss, so the pilot’s strike will surely put them on track for similar or even worse losses in full year 2014.  Whilst the French state remains a significant shareholder, the airline will be able to make such losses and survive for some time to come, but it increases the possibility that someday even the once great AF could become another Alitalia or Swiss debacle.

In the meantime, I better back to Google and see if I can find a flight back home – oh, I forgot – the Chinese government appears to have re-blocked Google!