Can society prosper when decline becomes the norm? Japan and Korea’s deteriorating demographics 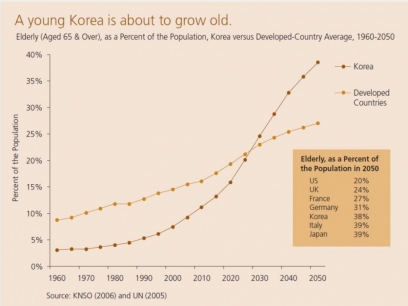 Source of graphic: Metlife’s report “The Ageing of Korea. Demographics and Retirement Policy in the Land of the Morning Calm”

It’s more than 25 years ago since I used to work regularly in Japan and I am visibly older but so is the population of Japan.    At checkout from my hotel, I even had the unusual experience of being the youngest guy in a suit at the checkout counters, and that’s the first time that has happened for a number of years!  The data reveals all. Japan is not only getting older but smaller: in 2011 the population decreased by 202,765 - the largest drop since statistics began, partly due to the tsunami 3/11 disasters.﻿  What on earth happens to business when the population experiences major decline like this?

Japan’s population is projected to fall to 86.74million by 20601, around 30% fall from the current 127 million or so (World Bank data 2010), and I find it hard to comprehend the consequences of this.  Whilst much of the discussion seems to focus around how the young will be able to pay for and look after the many old there will be, there is the massive question of what actually happens to a major industrial nation when it shrinks by a 1/3.   What happens to an economy when it shrinks 30%, what happens to manufacturing, to commerce, to entrepreneurship, to the no longer needed infrastructure, to the wealth and ability of a society to pay and defend itself militarily?

Meanwhile in neighbouring Korea, they face similar problems although with different root causes.  Whilst Korea is today evidently a dynamic economy and society, a deadly cocktail of factors particular to Korea will combine to dramatically change the profile of the entire society in a just a few years time:  historic dependence  on the family to look after the elderly rather than the state;  high density of population meaning many live in apartments not conducive to raising large families;  the relentless search for education and the subsequent independence of young women preferring jobs over marriage and children have led to low birth rates and low levels of provision  of supporting structures by the state to support an ageing population.  Part-time work is largely unknown, and immigration is not viable because of the already high urban populations and limitations on space (Korea is 70% mountains).  Fertility rates are the lowest of any country in the world (1.3 for the last decade, versus 2.07 needed to maintain a population.  Whereas Japan currently has the oldest median age of any nation (43 years) against Korea’s current 37, by 2050 Korea’s is projected to become the most elderly nation in the world with a median age of 57, making Korea the fastest ageing population in human history (whereas China will be the largest in history).  By 2050 half of all adults in Korea will be over 60 and more people will celebrate their 90th birthday each year than are born2.

These are profound challenges, never really experienced in the world up to now.  Whilst both Japan and Korea have shown incredible resilience and ability to adapt to change in the past, no nation has yet experienced how to maintain the integrity of their society and maintenance of their economy whilst shrinking by a 1/3, and it remains to be seen how these countries will manage and adapt.  The problem is that the only paradigm we know is more and more growth, and so societies, businesses and consultants like me are going to have to learn how to prosper in a world of decline rather than constant growth.

2.  Page 43 of Metlife’s report “THE AGING OF KOREA.  Demographics and Retirement Policy in the Land of the Morning Calm”