How can a few uninhabited islands trash world trade? 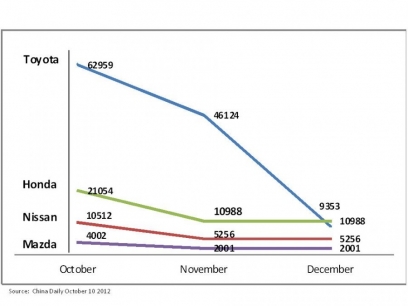 Being in China and reading only Chinese version of the news every days certainly gives one a different perspective on life and makes one realise how interlinked and co-dependant the economies of the world are today.   Insult Islam and your flag gets burned and maybe your ambassador gets killed:  insult China’s territorial status and you end up losing millions or billions of $ of trade, as the Japanese are finding out the hard way as the spat over the Diaoyu Islands shows no sign of abating.

I, like many (and probably many Japanese or Chinese) had certainly never heard of the Diaoyu Islands until a few weeks ago, but their recent ‘purchase’ by the Japanese Government has provoked a major reaction here, at both government and consumer level.  Whilst the history of these islands is complex and ownership is claimed and currently disputed by both China and Japan, neither side was actively disputing them until 1968 when it discovered that oil might be there, and more recently the Japanese Government purchase of the islands from an individual reignited the story.

It’s hard to know exactly how serious the issue is or what the forces at work are which persuade Chinese consumers to switch away from their preferred brand and utility because some distant islands are threatened, but China Daily uses high temperature descriptions of the crisis like “rising anger (by consumers)... over Japan’s ... purchase...”, and Chinese consumers are certainly shying away from Japanese products, and it’s hurting.  Japanese automobile makers for example, experienced a ‘disastrous decline in sales’ in September, with October and November expected to be considerably worse.  Here are some figures for declines in just one month (September):

These are massive drops by any standards, and overall Japanese car manufacturers can expect to see volumes drop by 20% for the whole year 2012 in a market which has been since 2005 the largest for Japanese manufacturers.  Up to now most of the focus has been on cars, possibly because they are large tangible objects to vent anger against, and there is little or no mention of the impact on Japanese electronics for example, but inevitably there is going to be impact there as well and possibly with other Japanese brands and industries (Uniqlo, etc) and Japanese industrial sales.  Certainly many Japanese people here are keeping a low profile and there are even stories of them going home.  Tourism is another industry to be affected.  JAL, the resurrected Japanese carrier reputedly had to cancel many flights and has undoubtedly suffered.    Part of the game play may be to deliberately make Japanese really suffer economically which should make them more compliant in any negotiations with China.

But in an interlinked world trade today cuts both ways.  Although the message in Chinese press is very much ‘they are going to hurt more than we are’, when Japanese car sales reduce, so do its Chinese JV partners and concessionaires.  But with so much testosterone flying about the big dirty secret which is never mentioned is that huge the majority of Japanese cars sold in China are actually made in China, so this dispute hurts Chinese trade as well.

Similarly in tourism, when Japanese tourists decide it’s better to stay away then China Eastern and China Airlines suffer (China Airlines for example has 20 routes between Japan and mainland China), and the Japanese are China’s 2nd largest sources of inbound tourists, so local trade and Chinese travel companies are suffering badly as well.

I am not sure what the implications for business strategy are, but the ‘have a broad portfolio’ school and ‘be in growing export markets’ have won the main arguments for the last few years.  But just as there is now a revisionist school with an increasing interest in reducing supply chain dependence on large, extended global footprints, so there is a lot to be said from having a strong business in your own local or domestic market - not immune from world events, but more under control and less vulnerable to when a trading partner takes offence at something you said or did.