Let your customers in to your lives! The power of quick, simple market surveys 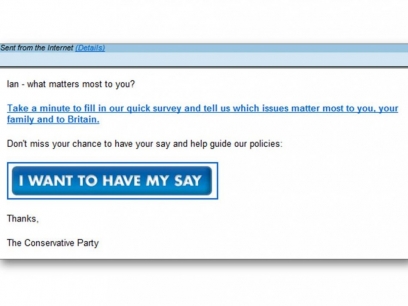 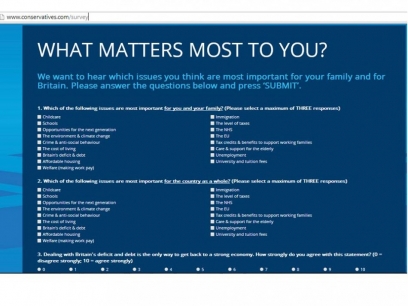 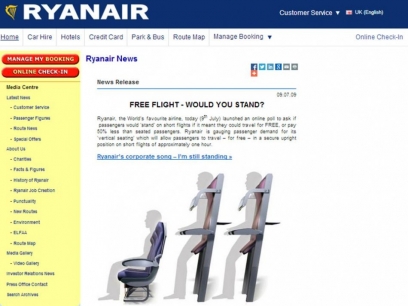 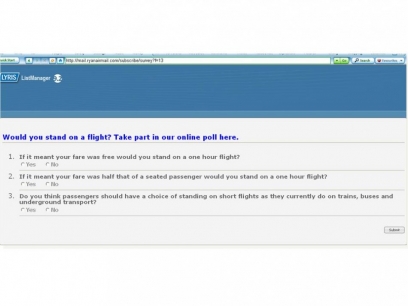 Ryanair would you stand on a flight web survey screenshot

I’m always looking out for examples of smart marketing, and I one arrived in my inbox the other day from an unexpected source – the Conservative Party in the UK (why me?).  Somehow, somewhere along the line I have got entered in their database, and now I often get apparently personal emails addressed to Ian from ‘David’ (that’s the Prime Minister we are talking about here…!).  There’s democracy for you (can you imagine getting a personal email from ‘Vladimir’, or ‘Kim’, or even 'Angela'?).   So already I’m flattered, if not yet engaged, but it makes one realise the power of e-Marcoms to reach out and touch in such a personalised way.  However, the recent email from the Conservative Party was a master class is short, sharp, effective marketing.

First it arrived in my email box with the subject heading “Ian: help guide our policies – have your say today”.  Not just vaguely sometime, somewhere, maybe, but TODAY!.  And me!  I can actually contribute and guide governing party’s policy? Wow!  Then for the email (see graphic):  5 short lines.  Clear, punchy, and telling me it only takes a minute to fill out their quick survey.  (only I minute?  I can do that…!).  Then a nice CTA (call to action) button “I WANT TO HAVE MY SAY” (well, who doesn’t, so this is a no-brainer)

Clicking on the CTA button takes you straight to the web survey, and there’s a nice welcome graphic.  More to the point, it is what they say –clear, quick and easy.  Not only does it genuinely take only the minute or so that they say, but I do start to feel that I am playing a role – that I am influencing policy, - that someone is out there listening, that my opinions count (OK, maybe I’m naïve, but you get my point?)  Have a look at the screen shot here, or have a go yourself on the survey at :  http://www.conservatives.com/survey)

I’m looking forward to seeing the results from the survey.  My guess is that several thousand people have replied, maybe tens or possibly hundreds of thousands.  Not only will those people feel ‘touched’ and communicated to, but the governing party now has real raw data about what are the hot topics, issues and concerns of today.  So there you are – quick, effective, simple marketing - reaching out and speaking to the clients and finding out what they want.  Low cost.  Potentially very insightful and actionable data to use.  All in all, great, effective marketing!

If you’re looking to other examples of simple surveys to get quick but powerful data from your customers, Ryanair’s mooted plan in 2009 to offer stand-up seats to passengers attracted interest and anger in probably equal portions, but was a masterclass of how to create a simple (web-based) survey, engage with one’s audience, and in 3 simple questions find out if customers would entertain the idea of standing, and if so, what was their price sensitivity or propensity to pay (the orginal web landing page appears to still be open at http://www.ryanair.com/en/news/free-flight-would-you-stand, although the actual survey is now closed, but a screen shot of it is shown here). Michael O'Leary doesn't seem to currently be seriously progressing this idea any more, at least not as a priority, but what a way to test, probe and explore new products, markets, prices and value propositions!

The message in all of this is, don’t forget the power of market research (MR).  But it doesn’t have to be done via big, expensive and time consuming surveys – attention spans are short and quick in today’s world and so should your MR be!  Keep it short and simple.  Do it reasonably often so it becomes a regular marketing activity, not a major ad painful exercise every few years.  Let customers into your organisations and tell you what they want from you.