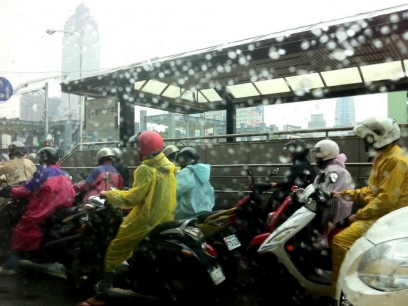 Am back in Taiwan after 20 years and obviously much has changed.  At that time there were nationalist flags everywhere, and a feeling a of an island somewhat under siege and desperate to forge its own identify and prove its place in the world.  Fast-forward to today and there seems to be a more relaxed, even if ambiguous relationship with China, and certainly more affluence and more confidence of Taiwan’s role in the world.  Today Taiwan is a powerful force in world trade, particularly in technology, even if only a relatively small country (23million people), and Taiwan has managed to punch above its weight.  In the paper here today are reports of Taiwan companies figuring in the Forbes 2000 largest companies, 41 of which are now Taiwanese.

Top of the pack is Hon Hai Precision, or more commonly known as Foxconn, the world’s largest EMS (Electronic Manufacturing Supplier), the subcontractor who builds Apple’s products as well as for most large OEMs such as HP and Dell, coming in at 113 on the Forbes list with a turnover of $132.07bn.   Foxconn is absolutely massive with more than 1,2million employees (OK, less than Wal-Mart’s 2,2million, but still enormous), sales of $132bn, gross profits of around $11bn and nett profits of around $3bn.

Interestingly, out of 41 Taiwanese companies in the Forbes Top 2000(1), 20 or almost half are in electronics, IT or telecoms.  In fact Taiwan continues to be a key actor in the electronics, IT and telecoms industries, and the island has a very high proportion of electronics engineers as graduates, and massive infrastructure of hundreds of small manufacturers and subcontractors to support the large ones listed below.

But behind the activity and undoubted success of these top companies, there lie serious questions about the general situation of Taiwanese companies.  Firstly, most of the companies listed here produce pretty small profits.  The main reason for this is because Taiwanese companies tend to lie somewhat down the food chain, such being a subcontractor (ODM or CMS) or as component suppliers, so the larger margins generally pass to the brand holder, not the invisible subcontractor.  And the reason why Taiwan companies have this role in the supply chain rather than as brand principle is complicated, but partly because Taiwanese companies tend not to invest in brand building, and secondly because they are not particularly good at it.

Out of the electronics/IT /telecoms top 20 companies listed above, arguably only 3 (HTC, ASUS and Acer) have any form of global brand recognition.  HTC makes good quality phones (many users say they are better than Samsung), but they lack the critical mass, marketing spend and brand building to build a really good consumer presence.  Given the world-class competition that Samsung and iPhone represent for HTC in mobiles and the decline in laptops and desktops that threaten Asus and Acer core business, the situation going forward is therefore somewhat precarious.

Whilst Hon Hai and TSMC are world class companies, Hon Hai is partly subject to the fortunes of Apple.  Whilst TSMC seems to be more than holding its own in the semi industry for the moment, (most recent forecast a 16-17% growth for 2nd Qtr 2013 in an industry that is otherwise only growing by some 2-3%), although now that Samsung is increasingly moving into the foundry business with seemingly unlimited capital, Samsung increasingly threatens TSMC also.

Thus runs the news article in Taiwan’s ‘The China Post’ (April 18).  A few years ago, before the emergence of Korean electronics giants, Taiwan was the leading provider in Asia of electronics products and components.  Now it feels severely threatened by the increasing supremacy of Korean products and brands on the one hand, and Chinese lower price competition on the other.  Recently there were news stories that Korean companies were conducting a ‘Kill Taiwan’ campaign and that Samsung for example was hiring computer bloggers to trash HTC online.

As Chinese companies like ZTE (mobile phones) and TCL (displays and televisions) grow, the more the Taiwanese companies are struggling, nether capturing the added value that brands can bring, nor benefiting from lower costs of the mainland neighbours

Finally there is the ongoing question of Chinese government’s ambitions and intentions regarding Taiwan, which they regard as being firmly part of China.  Whilst the threat of invasion may have subsided recently, America’s desire to defend Taiwan against Chinese invasion is ambiguous, and China has recently posted DF-21D missile batteries on the straits(2) (which are specifically designed to destroy ships such as aircraft carriers), so the American capacity to despatch its carriers if there ever was a problem is now severely hobbled.

Korea has managed in a remarkably short period of time (the last 5-10 years particularly) to build a clutch of different brands (viz. Fila, Huyundai, LG, Samsung, Kia), and China is coming up fast (Haier, ZTE, etc), so Taiwan companies need to learn brand building, and to do so rather quickly and wilst there's still some money and time to do so, if they are to avoid being squeezed between Korea and mainland China.