What goes up must slow down 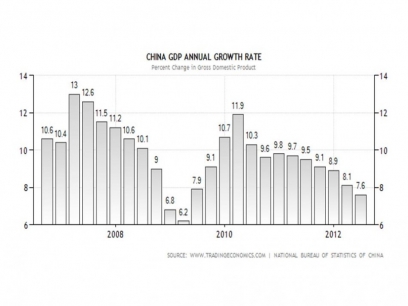 China’s upward trajectory economy has defied gravity for some years but there are real signs that the economy is starting to change.  Of course China famously reduced its growth forecast to around 7,6-8% from 9 something last year, but even so, 7-8% growth is still phenomenal  by any means.  But now there are various small but important signs starting to emerge which signal that life will start to get increasingly difficult both for individual Chinese companies and its economy.

First to look at the macro factors, China’s economic growth is currently on a continuous downward slope (see the chart alongside Source:  http://www.tradingeconomics.com/china/gdp-growth-annual), and at its lowest since growth 2009.  Whilst this is not the first time to see a slowdown in growth, the question is “are there structural difference between now and 2009 when China’s growth rebounded?”   The answer is yes, but unfortunately the structural differences are not positive for China, the main points being:

The BCG conclusion is that few companies have established a truly world class capability and skill set.  All of this should give encouragement to western businesses who thought that the growth of the Chinese competitors was irresistible.  History teaches us that no empire lasts for ever.  Science teaches us that gravity pulls everyone back to earth no matter how strong they are.  Even China it seems, cannot avoid these simple laws and the onward march of Chinese products and companies is by no means self evident.

[i] Page 5 of Homecoming for US Manufacturing?’ at http://www.pwc.com/us/en/industrial-products/publications/us-manufacturing-resurgence.jhtml