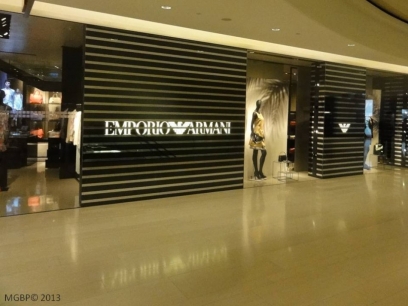 One of many Armani stores in Hong Kong

If Taiwan suffers from a lack of brands (cf ) then Hong Kong clearly suffers from the opposite – too many brands, too much, and brands dominating everywhere you go.  ‘Shoppers’ heaven’ it may be, but two days in HK and I’m all branded out, exhausted from brand overload: Gucci, Chanel, Armani, Coach and so on, wherever you go in the shops; Ferraris, Carreras, and the big Mercedes SUVs on the roads.

Besides being impressed by the obvious wealth and industriousness of the place, I’ve never seen such distribution intensity (the number of same brand shops or outlets within a certain distance or proximity), except arguably for coffee shops in London.  Distribution intensity in HK is so high that if you happen to miss one Armani or Rolex shop, don’t worry, because there will be another one in 100 metres or so, only this time probably bigger.  The local HK jeweller Chow Tai Fook in particular appears to have saturated HK Island and Kowloon, with an outlet seemingly every few hundred meters.   At major junctions there are often 2 shops, each on opposite corners, so you don’t even have to cross the road to get to one!  Chow Tai Fook shops are also marked by the large number of attentive and helpful serving staff, and by the seemingly endless gaggle of customers poring over jewellery items and watches, so a volume of customers, and a level of interest and intensity of sales engagement that I have rarely seen.  I mean for heaven’s sake, how much jewellery and watches can a population actually consume?

But driving demand in HK is an indigenous 7m population, with one of the highest levels of education, employment, wealth and health in the developed world, supplemented by an incredible nearly 40 million visitors per year.

For an English person, HK is slightly disturbing experience, with whiffs of familiarity:  street signs give their old British name first (old British names like Nathan Road, Salisbury Road, Argyle Street, etc), then with the Chinese name and characters underneath; street furniture and signs are definitely UK style, cars drive on the left and have UK look number plates, electric plugs an sockets are the UK square 3 pin system. And yet the indigenous population is 97% Chinese, and if you wander just a bit off the beaten track you are left with no doubt that you are in a Chinese city, not a little part of England, albeit a hybrid and somewhat schizophrenic version, often described as ‘where east meets west’.

But HK is clean, and safe.  The buildings look like they are built to last.   The British never gave the Hong Kong indigenous population democracy.  Now, in bizarre twist, Hong Kongers have more (but not yet universal) suffrage under the benign agreement but watching eye of mainland China, at least for the next 35 years of so until the current Special Administration Region agreement runs out.  In the meantime, having HK as a fully fledged capitalistic model, showing how Chinese government and benign political, social and economic conditions can co-exist side by side clearly shows China in a very positive way.

Whilst some vestiges of Brutishness remain, the city has really made progress since the British handed HK power to the Chinese in 1997.  Now the world’s 11th largest trading entity and the world’s largest re-export centre, its place as a key entry and exit point for China has fuelled growth at a phenomenal rate.  Not only the physical goods, but financial investments and money flowing in and out of mainland China which are fuelling the extraordinary growth, and HK has more corporate headquarters than anywhere else in Asia Pacific.  Tax is low as is corruption.  Take a trip round HK and the many islands and the New Territories are now home to massive developments of impressive skyscrapers as every available part of land is used.   Apparently HK is the world’s most vertical city with more people living or working above the 14th floor than anywhere else in the world.  Mega highways, bridges, flyovers and infrastructure and pervasive, cheap efficient public transport (soon, there will be high speed rail linked to China), make HK look like something out of SimCity.

More significantly, there’s an energy, a bustle, an enterprise in HK that makes old Europe look lethargic, un-enterprising, heavy and fettered by history and legislation.  In Europe we need to look and learn.