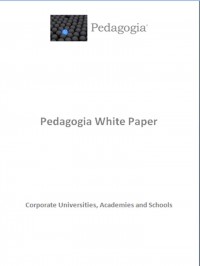 Corporate Universities (CUs) have been growing in number since their inception in the 1950s to the point where there are thought to be over 4000 CUs in existence today. Whilst most large US and European corporations have their own CU, now many Chinese, Indian, African and South American organisations are setting up their CUs.

In some instances the CU is a vanity project, or a training department masquerading under a more expensive wrapper, but in the majority of cases CUs are set up as a strategic response to the recognition that a company’s people are its greatest asset, and that the corporation needs to equip and align its people with the knowledge, skills and leadership capability necessary to compete in today’s competitive world. But what are the real reasons why an organisation sets up a CU and what does a CU really do? What is the difference between CU, an Academy, College or a School? How much does it cost, and who should it report to? Will CUs carry on being, or will they drop away as virtual, online training increases?  This White Paper explains the rationale, role and scope of a CU and gives some indication of cost and different business models.